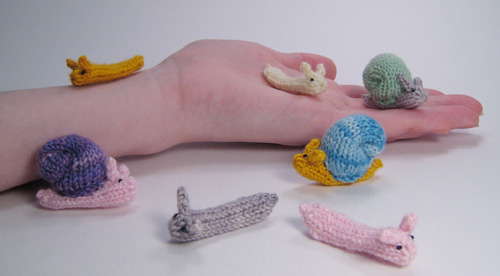 When they’re not vying to determine which species will slowly take over the world, snails and slugs make cute house pets. Knit some up for your friends and hide them in unusual places.

Antennae
Cast on 2 sts onto one dpn, and work 9 rows in i-cord. Break yarn and draw through sts.

With your tapestry needle, thread the antennae through two sts on the top of the head of the body, placed 3 sts from the end you closed off. 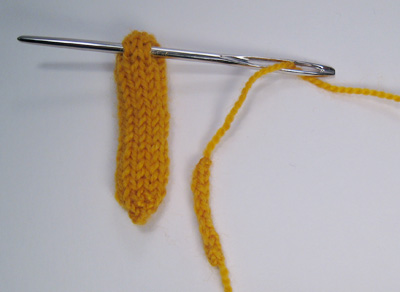 Weave the loose ends of the antennae back through the i-cord and out through the body below. (It might be a bit tight, but do the best you can.)

For each eye, make two of the tiniest stitches in black embroidery thread just below each antenna. (I don’t recommend using french knots, because they will slip right through your knitting.)

If you’re making a slug, you’re done! For a snail, continue on with a contrasting color for the shell.

Sew open end of shell to snail body with backstitch. And there’s your snail! Whose side are you on??