My new year’s resolution this year was a fun one: go to more museums and galleries. It’s embarrassing that I’ve now lived in New York for seven years and there are so many famous museums I’ve still never visited! So a couple of weeks ago I came through on my resolution and went to the Whitney Museum for the first time. I loved it! It’s a nice size (five not-so-big floors), the building is cool (all thick concrete), and it wasn’t crowded at all on a Wednesday afternoon.

I started with their American Legends show, which features artwork from big names of the first half of the 20th Century. I haven’t studied much art history, so while some of it was very familiar or vaguely familiar, most of it was new to me. Paintings dominated, of course, but my favorite pieces were by Alexander Calder. If the name isn’t familiar to you, then certainly his work is. Calder basically invented the hanging mobile, and his perfectly balanced pieces of orbiting shapes are iconic. I loved the delicate engineering of his mobiles and balancing sculptures, but my favorite pieces on exhibit were his kinetic circus toys. 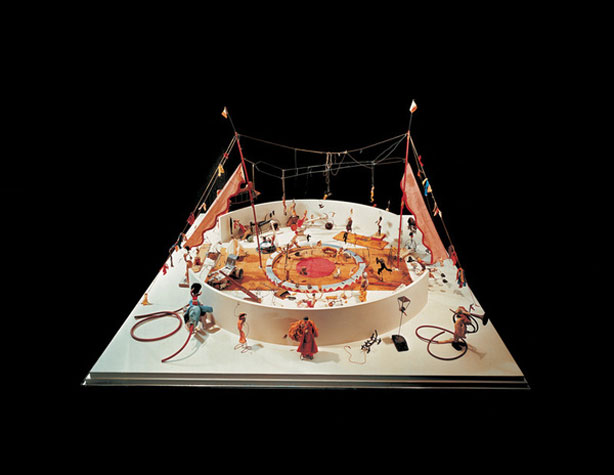 When living in Paris in the 1920s, Calder created a cast of human and animal figures made of wire and scraps of other simple materials. Each of these toys could perform a trick of motion when manipulated by hand: a lion tamer snapped a whip, a dog walked around on its hind legs. Calder held entire mini circus performances in which he would get down on the floor and manipulate his modernist toys for audiences adults and children. (Back in New York, fans could book Calder’s circus through the Junior League at Saks Fifth Avenue.) I love the humor and intimate interaction involved in these seemingly crude pieces. The toys are works of art on their own, but they are meant to be moved by hand and experienced as a live performance. The Whitney has a film of Calder performing his circus in 1955, but I have a feeling that the poor quality doesn’t do the circus justice, and seeing it in person in the ’20s must have been a vastly different experience. In the 1930s Calder moved on to focus on his wire sculptures and abstract pieces. But his playful, interactive circus strikes me as his richest artistic experiment.