Today I’m excited to share an interview I did with David and Esther Betten, the husband-and-wife owners of of Argyle, my local yarn store in Brooklyn! David and Esther opened their shop just down the street from me in the fall of 2011, so they’re still kind of the new kids on the block, but now they’ve been around long enough to have experienced all four seasons and the ups and downs in yarn retailing that come with them. They were generous enough to be really honest and open in this interview, and now I’m even more impressed by the bravery, smarts, and passion that they continue to put into Argyle every day.

Read the full interview after the jump!

Anna: I’m sure it takes a ton of consideration and weighing of options before making the decision to start a small business. Can you describe the moment that you both decided yes, you’re going to go for it?

David: Sure. Opening a yarn store was actually my idea. I thought it would be a dream come true if Esther could use her specialist skills to do something that she loves all day for a living. (I love to knit, though if Esther’s the resident sensei, I’m more of a yellow-belt!). But while someone else’s dreams often seem so achievable, when it’s our own dream it often seem too good to come true.

So I spent a year researching and writing a formal business plan before I convinced my wife that we could do this. We entered Brooklyn Public Library’s PowerUp contest, a terrific program that provided free seminars and counseling on how to write and present a business plan. We ended up winning a “merit award,” and that gave us some much-needed confidence.

But still, at the end of the day it’s terrifying to know that before you can even rent a space, you’ll have to borrow three times what you make in a year with no guarantee you won’t lose it all.

It feels like you’re both standing on a cliff high above deep water, and the thought of taking the leap together is so scary that you feel paralyzed. But then a little voice creeps in that tells you, “If you jump, it’s true you don’t know what’s waiting for you down there. But if you don’t, then you will never go anywhere, and you remain standing on this same rock forever.” And when not leaping became scarier than leaping, we decided yes, we’re going to go for it. Anna: Who or what was your role model that you turned to for guidance or inspiration when planning Argyle?

Esther: There’s a great store in Portland, Oregon called Knit Purl we had always admired. They had a lot of the qualities we were hoping to create: Clean and sleek, brightly lit so you can see all the colors and stitches clearly, really friendly and cheerful staff, and a feeling of neighborhood community.

It’s inspiring to be around so many people who have the ability to look at raw materials and use their imagination to see inside it the potential energy of transformation. It’s sometimes remarkable to see how different people can take the exact same ball of yarn and make from it a shawl, a slipper, a sweater, a felted bag, or (as it turns out) even a pile of puppies. Even when several crafters follow the same pattern, they make unique choices to personalize their project. Every hand-made garment truly is unique.

“I feel like a kid in a candy store” is one of the happiest things we get to hear during our day. How often does a grownup get to feel that way? 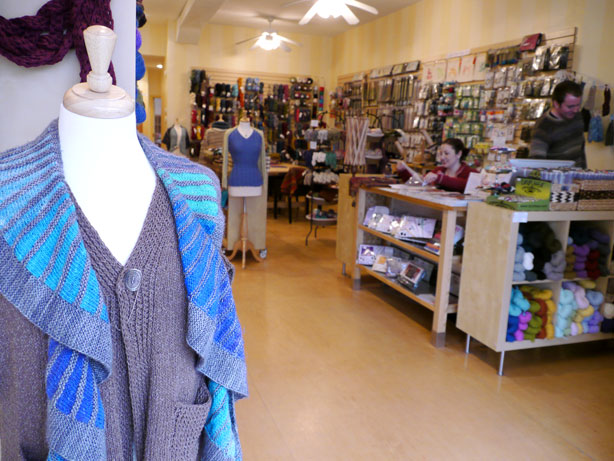 Anna: What’s your approach to choosing which yarns to stock? And what guides your color selection?

David: We noticed that yarn stores seem to drop into two categories: Big box chains that only sell inexpensive acrylics; and small boutiques that only stock gourmet products at upscale prices. We wanted to bridge the gap with a broad range of prices from top-tier selections on down to the most economical products.

We feel like many crafters go back and forth depending on the project. If it’s 200 yards of yarn for a hat, then maybe you could spring for the fancy baby alpaca. If it’s 2,000 yards for a big afghan, the same person might go for a quality acrylic to keep it within the same budget. We feel that all yarn, even the most inexpensive we have, deserves to be arranged attractively on a nice wooden shelf, not tossed into a wire rack.

When it comes to color, would I sound like Scrooge McDuck if I said we mostly order the colors that people like to buy the most? We’ve learned that when ordering yarn for the store, not only do you not want to be a snob, you don’t even want to have an emotional attachment to your favorite colors. That said, New Yorkers seem to enjoy complex, heathered colors that contain a bit of other colors within them. (Charcoal with silver, denim with seashell, moss with rust). Anna: How has your relationship with yarn changed since you opened the store?

Esther: Before Argyle, I used to think about the price of yarn and the feel of it, but never about brand name or trendiness. Now I’m more conscious of why certain garments and patterns would require specific fiber contents, and how important it can be to knit in anticipation of the upcoming season.

Given that yarn is a raw material, it can be surprising how quickly trends can come and go over the course of two seasons, and that yarns, like designer clothing, are subject to the whims of fashion. Last fall a sudden demand for the color yellow came out of nowhere and then, as mysteriously as it appeared, it was gone. Some companies (like Berroco and Noro) are willing to try bold, novel experiments every season. Not every new yarn is an instant hit, but together they keep things new, fresh, and exciting.

Anna: What’s the strangest request someone has come into your store with?

David: The winner of the think-outside-the-box award goes to a close friend of ours who wanted us to sell yarn in different locations from a catering trailer, food cart style. I don’t know what percentage of commuters would jump at a “coffee-and-a-skein” deal, but can you imagine how stoked you’d be if actually passed one on your way to work? (“I’ll take a ‘Pumpkin Spice,’ please. No no, not the coffee, the cotton.”)

Surprising was a request that we provide customers with access to holy water. Surprising, because we’re only one block away from the Catholic church, but then, we’re only a block away from Greenwood Cemetery as well, so I suppose you can never be too over-prepared.

Anna: What has been your most satisfying customer interaction so far?

There’s one variation of that relationship which is unusually touching. On rare occasions, a woman will come to us who wants to learn to knit with a special purpose in mind: Her mother had always loved to knit while she was growing up, and although her mom tried to teach her, it was something she resisted and never cared to learn. Now a grown woman, her mother has passed on, and the memory of her craftsmanship now comes with a sense of possibilities of times that could have been. We respect their conviction that the opportunity has not been lost to honor the family traditions of their mother through a shared heritage. Anna: How do you see operating a yarn store as different from other types of retail stores?

David: It’s the best! Shopping for yarn is supposed to be one of those experiences that makes it all worth it. Your work week’s over and you’ve got enough left over at the end of the day to treat yourself to something special, something you’ve been looking forward to. You’re about to buy something not because you have to, but because you deserve it and you’ve earned it. We’re really fortunate to work in a place where people walk in thinking, “All right, now I can finally relax!”

Plus, there’s a real sense of community in a yarn store. The regulars get to know each other and it’s a great opportunity to show off your latest creation with people who can really appreciate all the hard work that went into it. Though all different ages and levels of experience, everyone is working at developing a real skill side by side, and it’s amazing to watch folks go from being a beginner to a level of mastery over time.

In an increasingly digitized world, we’re not surprised that the fastest growing demographic is women in their 20s. After all, in an age when most presents can be generated by the click of a button, to be able to say to someone, “I made this for you this month, with love, with my own two hands” is an astonishing declaration.

Plus, owning a yarn shop is cozier.

Anna: You both have backgrounds in very different fields – childcare and bar tending, right? What do you bring from those experiences to your current jobs as store owners and managers?

David: Having worked in the service industry for over a decade each, we learned to see everyone who comes in the door primarily as our guest, not as a potential sale. In a restaurant, your job is to take care of your guests and make them feel comfortable, not to convince them they’re hungry.

You’d think a restaurant owner was crazy to say, “Try to get this customer to consume as much food and alcohol in one sitting as you can, because we may never see her again,” but that’s exactly how many retailers behave. It’s rather when folks leave saying, “I had a great time, and I can’t wait to come back” when we know we’re treating our guests right.

That said, for all the compliments Esther receives on her expertise at knitting, her secret superpower is actually that she’s worked as a professional bookkeeper. Man, that helps.

Anna: What’s unique about owning a yarn store in Brooklyn as opposed to another city?

David: There’s a level of can-do ambition in our customers that’s inspiring, and part of New York’s dream-big aspirations in general. One of our regulars is coming out with a new book of top-down knitting, another designs sweaters and knits to understand the structure underlying his work, and another sells her inspired crochet designs on her Etsy site. Also, lest we forget, Brooklyn is the home base of Mochimochi Land! (Take that, Manhattan!)

That’s the long answer. The short answer is: It’s awesomer. Thank you, David and Esther, for sharing your experiences with us! I find a lot of inspiration in your story, and I hope Argyle is here to stay for a long time to come.

If you find yourself in Brooklyn, be sure to pay them a visit!

8 thoughts on “Interview: David and Esther of Argyle Yarn Shop”