I just spent more than 24 hours without the internet because a couple of things got unhooked somewhere by accident. It was crazy! It was like having the power go out or breaking an arm—so many tasks had to be re-learned. Anyway, I only mention it because in the middle of this crisis, we got a very timely package from my mother-in-law. It was an empty cereal box. Store brand Grape Nuts. But check out the back! 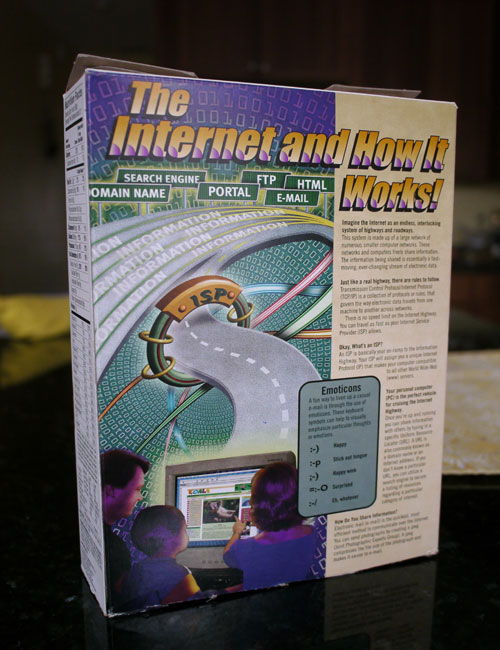 It’s as if someone at Hannaford’s generic cereal division decided that people who eat generic Grape Nuts would like to be transported to the year 1996 as they’re eating breakfast, and then at least one other person approved of that idea and made it happen. It’s visually stunning, and the text is perfectly odd too. Here’s a closer look: It strikes me as especially weird because, even if this is meant for the few elderly people who still haven’t acquainted themselves with the internet, I’m thinking the information provided wouldn’t be particularly helpful to them. Except maybe for the emoticons key.

I honestly thought this was an ancient cereal box that Bonney unearthed in her pantry or craft room, but no! This box’s contents weren’t supposed to expire until December 2nd of this year. My new theory is that Hannaford outsources its cereal box content to someplace bizarre… but where? I really would like someone (who has more spare time than I) to get to the bottom of this.

By the way, we’re now back online and everything is going to be OK. Everyone hug your internet extra tight tonight!

9 thoughts on “The Internet and How it Works!”