Project Giant Gnome has been clicking along! With the first guy done in only a few weeks (thanks to super thick Hometown USA and Wool-Ease Thick & Quick generously provided by Lion Brand), I couldn’t resist jumping headfirst into making him a giant friend. Looking at this picture again, I could probably get used to a rug like this in my living room. Because I had the pattern more or less worked out from the first giant gnome, and because I was out of stuffing after using 16 lbs of it on him, I knitted this one without any stuffing, just leaving the hole at the bottom to add later.

But the idea of shipping him off to Korea without getting a look at him first in his full-figured glory just didn’t sit right with me, so I went ahead and splurged on another 20 lbs of stuffing. Yep, this is the kind of major purchase that excites me these days. (In case anyone is interested, I order my stuffing in bulk from Batt-Mart.)

And so I got to try out my plan of stuffing my giant gnome from the bottom. 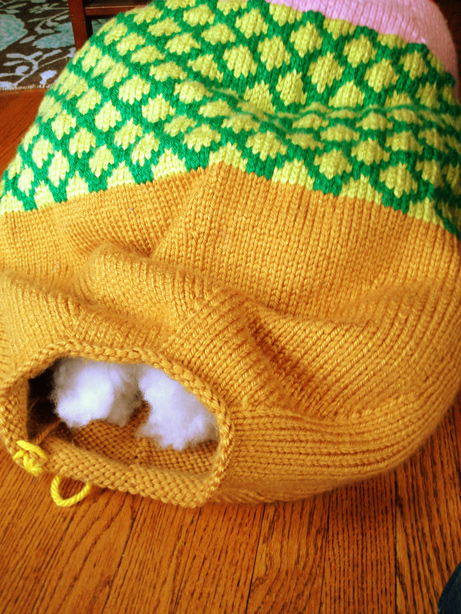 This was real work! I was actually sweating by the end. Stuffing him just right involved much prodding and massaging, and I even had to sit on him a couple of times to get the polyester to take the shape I wanted. Whew! So now I have two giant gnome faces staring at me all day while I work. In a couple of weeks, I’ll “deflate” them again for their big trip to Korea, and I’ll be stuck with about 30 lbs of stuffing at home to repurpose. (That’s going to make a whole lot of tiny kits!)

Why am I knitting giant gnomes? They’re for an art show at Everyday Mooonday gallery in Seoul next month! I’ll share the official announcement with a title and everything soon.

Many thanks to Lion Brand for providing yarn support for this ultimate gnome project!

5 thoughts on “Giant Gnome has a Big New Friend!”