As I mentioned the other day in the post about my Tiny Sun, it has been a whole year since I began the “Tiny” series here on the Mochimochi Blog!

For those of you who weren’t with me a year ago, in July 2009 I was looking for a fun challenge for the month, and I decided to try knitting a new tiny toy every weekday and posting it here on my blog. I hesitantly started with a Tiny Brain, but then it was easy to continue with all the helpful suggestions that people gave me in the comments. When the month of July was over, I was still getting lots of super ideas, so I thought I’d continue the series with a new tiny knitted toy each week. I’ve surprised myself by keeping it up ever since then, without (as far as I can recall, at least) a single week missed!

I thought it would be fun to put together a visual with all of the Tinys that I’ve made over the past year. It’s a total of 70 teeny-tiny Mochimochis! Here they are in alphabetical order. 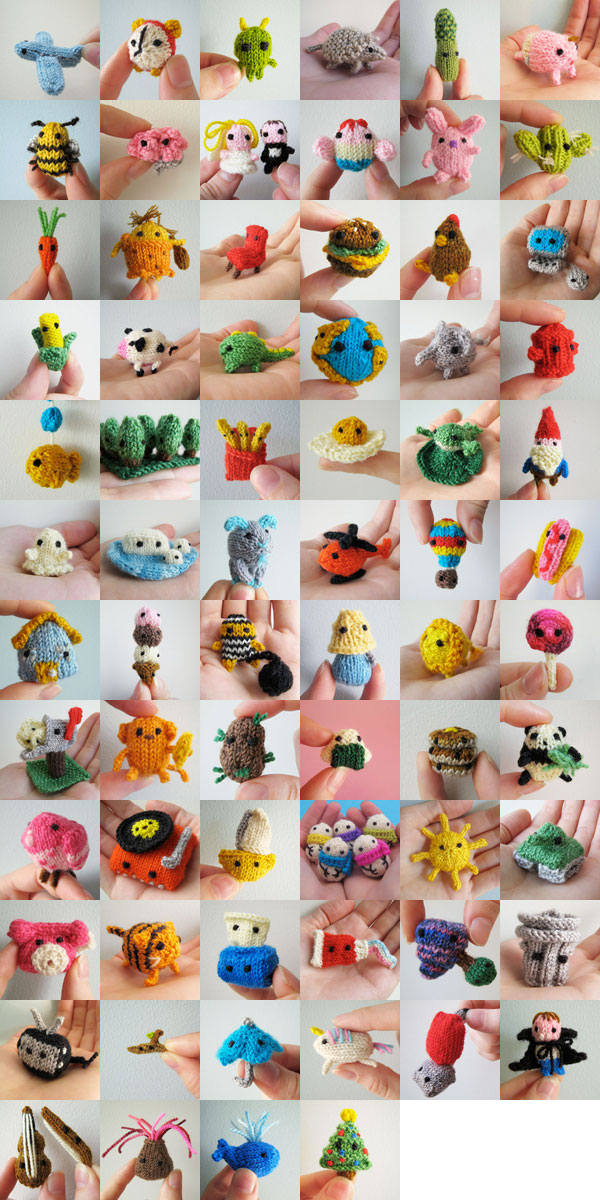 I’ve thought about stopping the series now that it’s been a year, but I would be a little sad to do so. There are just so many Tiny possibilities left in this world! I could also start on some other type of series, but nothing that I’ve come up with so far (like knitting giant things, for example) has quite gotten me excited enough. But if you’ve had your fill of tiny knitting and you have an idea for something totally different, I would love to hear it!

I’ve also been happy to get lots of inquiries about patterns for these tiny toys. I do plan to release another set of Tiny patterns sometime soon, so please keep an eye out for it! (I’m pretty certain that the Tiny Gnome and Tiny Frog will be two of the four patterns, but I’m still undecided about the other two…)